Greetings!
I am writing this quick post about the last week and a half from the summer cottage on my phone. A week ago the weather was amazing so Annina and I headed out to sea for some wonderful skiing. The sea ice was still quite thick and we toured around the islands. The second day we decided to bring our little stove with us and have a nice little picnic. With a feeling of spring we layed in the cool sun and cooked up some potatoes and sausage. It was perfect and after awhile we decided to head home. It wS a very nice relaxing weekend and we really enjoyed the outing 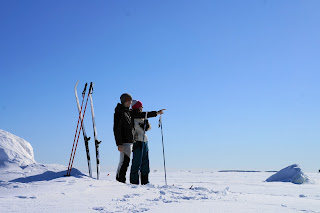 As the week started I did some very nice ski loops in Sibbo. The first loop I did was a very nice 30km loop that went winding through the hills and farms of central Sibbo. It was awesome and the groomed tracks were in good condition. The next day I decided to go on a longer 50km loop that went around the center of Sibbo. It was another fantastic day out and despite the wind the sun was bright and felt strong. Then a few days later we had the photoshoot for my new cycling team Team Velocitor. It was funny and good to see my teamates. I also recieved my new bike for the season which looks brilliant in all it's Italian splendor. I can't wait for the first race! :-) 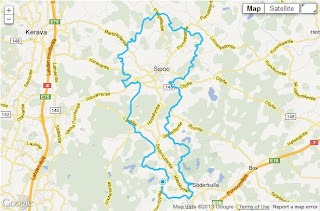 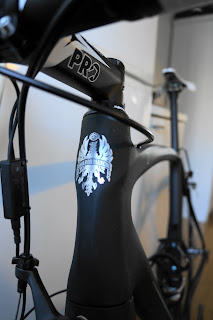 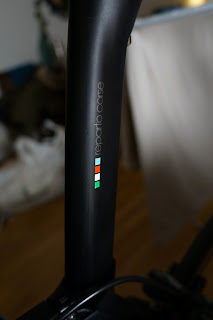 This last weekend was another fun relaxing weekend. On Saturday we met with Annina's brotjers family for a nice outing. We had a nice picnic in the forest by their house and played around on the sleds. Afterwards we had a nice sauna and had a very wonderful dinner that Elu prepared. It was a very nice relaxing day thanks to them. The next day Annina and I headed out again skiing out on the sea ice. We feel privledged to live so close to the sea that we can do that. 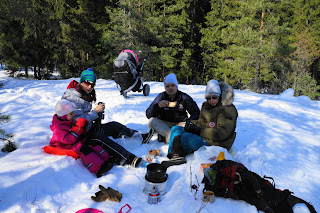 Spring is coming fast and I have decided to hang up my ice axes up for the season. Now I will concentrate on cycling and rock climbing. So far it is beautiful weather here at the cottage! Hopefully it continues! :-) We wish eveyone a happy easter and stay tuned for updates! Thanks for reading! :-) 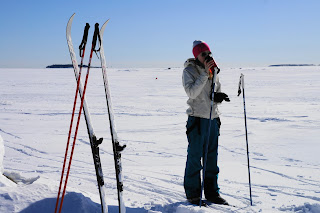 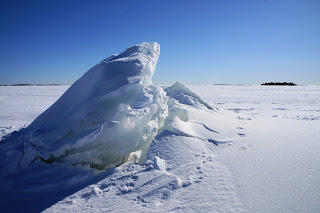 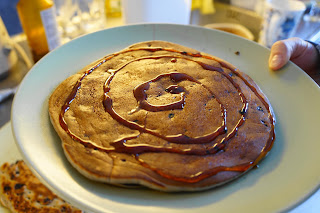 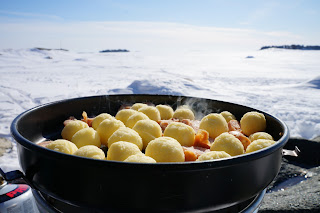 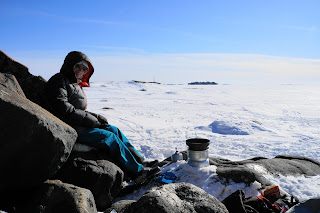 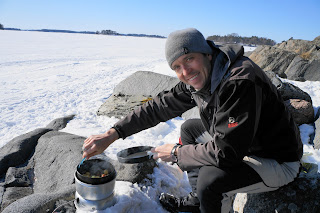 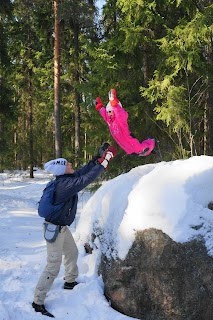 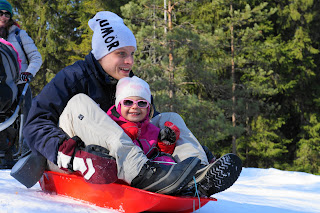 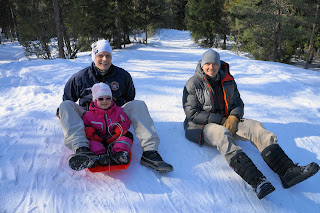 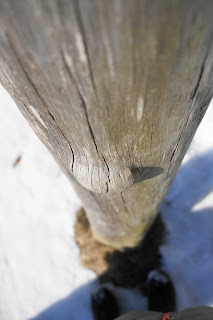 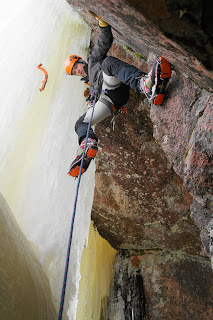 The last two days have been days of touring on vertical and horizontal ice.  Two days ago I met Jody and we headed out for a quick ice climb to Vihti.  What started was marginal weather that soon turned to beautiful sunny weather.  It was very nice as we had to snowshoe across a lake to reach the small routes.  We did a quick easy warm up route and then I decided to try a pretty hard eliminate route.  We managed to get inside the cave inside the waterfall and I did a route which stemmed the water fall and the back of the cave.  I then smashed some icicles and swung out onto the pillar and finished up the route.  It was great fun and was a really nice route despite being short.  We then decided to head to this hanging pillar which was also pretty cool.  It was a bit tricky for the feet as the free hanging pillar was really narrow at the bottom.  Anyways I managed to lead it no problem.  Then we decided to finish up the day by top roping a mixed line.  The start was 3d overhanging problem which led to a frozen mossy groove.  It was something about M6 or so and we both managed on our first go without falling!  It would be nice to lead it sometime! =)  Then we decided to head out and came out of the cliffs shadow and was blinded by the sun on the way back to the car.  It was a fantastic day out thanks to Jody!

Yesterday I decided to go for a short ski between all of my applications and go out on the sea ice.  It was another brilliant day as i did a nice loop around Kalvik.  The sea ice is still very good and very solid in the bays.  The weather this week has been amazing!  I wish the winter would be like this all the time(Cold and sunny)! 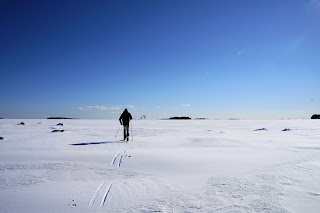 I can't wait for the weekend as it should be nice weather again!  Next week Johan and I are hoping to get out flying our kites again.  Hopefully the weather cooperates and we manage to get one or two last sessions in! I also plan on doing the tour de Sippo in the beginning on the week sometime by skis.  Should also be fun!  Thanks for reading and stay tuned for updates! =) 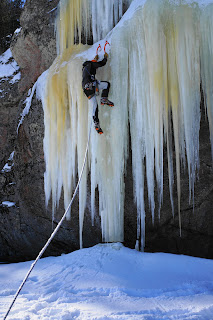 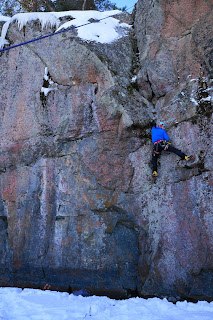 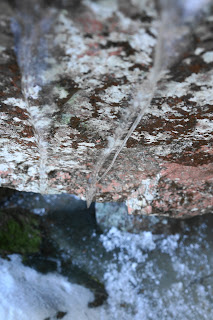 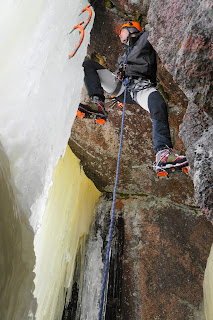 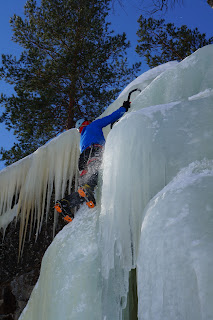 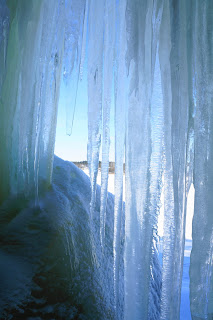 Posted by Unknown at 2:34 PM No comments:

A Great Mixed Day Out

This weekend started very relaxed on Saturday by taking a stroll with Annina on the sea ice.  We also visited our local seaside cafe on the way home and enjoyed a nice homemade munkki (pastry).    It was amazing weather and we enjoyed the rest of the day just relaxing at home.

Sunday morning I woke up pretty early and Johan and I went ice climbing.  The sun was again gleaming and the air was very tranquil and cold.  We went to this really nice cliff to have a look and found some amazing winter routes.  There are still a few more easy climbs to be had there.  First we did an awkward ice climb that could be protected with rock gear.  It was pretty fun.  Next we did this crazy mixed climb up a very steep face with these overhanging ice blobs placed every so often.  There was really marginal tool placements and it felt really scary even on top rope!  Next we decided to have a go at this easy looking crumbly chimney.  The bottom starts out on a thin ice fall that turns into some strange slightly overhanging dry tooling.  It felt okay but the roof at the top turned out to be very committing and a bit scary.  I didn't realized how overhanging the route was until I dropped some snow from the top to check.  I was pretty surprised.  We even had an audience for this climb as the local farmer and his family were out for a ski. 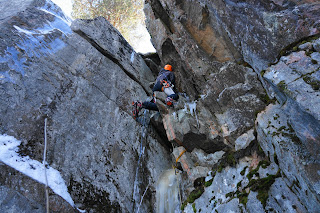 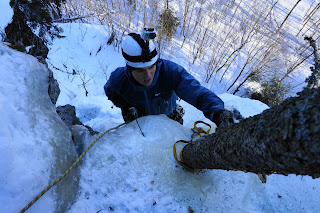 We finished up and had a nice snowshoe out and really enjoyed ourselves as the weather was perfect.  On the drive home we were talking about summer climbing as we both were longing for the simplicity of the summer gear again.  Can't wait but I imagine it will be here sooner than I can imagine!

After I got home Annina and I jumped on our skis and went out onto the sea ice and skied to some local islands.  The sunset was amazing and it was really nice to get out skiing with her while the conditions were so perfect.  We returned wind chapped and with a big smiles on our faces as the day wound down and the weekend came to a close.  A great weekend thanks to Annina and Johan! =) 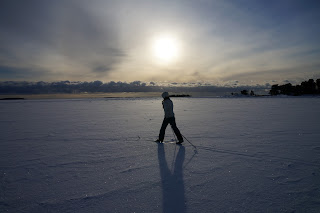 Thanks for reading and stay tuned for updates! 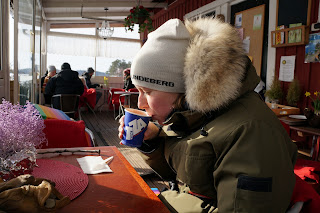 A Nice Training Day and the Bozemanator M6+

Yesterday I had a really nice training session and the weather was impeccable.  I rode my bike to Sipoo with the skis on my back flapping in the wind.  I then continued on in the long valley along a very nice ski trail.  It was pretty fun as it weaves in between all the farms and has some nice hills in it.  Then after a nice out and back, I headed home the same way with a big sun scorched smile on my face.  I couldn't believe the weather and the further I went the faster I was getting.  In the end I ended up doing about 4.5 hours of training which isn't too much, but still nice.  It was pretty awesome day out.  Next week I will try to do the 'Tour de Sipoo' by skis.  Should be fun!

This last Tuesday evening Juppe and I headed out to do my climbing project in Sipoo.
https://vimeo.com/61324061
It was pretty intense but I managed the first ascent! =)  The route which is about 25m (82ft) high goes up a vertical thin smear of ice to some thicker ice and a overhanging mixed section at the top.  I did it protected with trad gear (cams and ice screws).  It was my first official attempt so I was pretty stoked.  Physically even though the route was steep it felt fine but it was a very hard route mentally.  There are many things that went wrong with the film.
1. I accidentally left the camera in manual focus....so it is slightly out of focus all the time.
2. We had a light malfunction where our big light stopped working properly
3. The camera turned off before I reached the top.  I was climbing very slow due to the bad ice so I had to be very careful.  I started climbing after about 8min... then the camera shut off at 29.30.  I edited out the parts where I was placing most of the gear.
4.  The bottom camera as a backup didn't work in the top section so you can't really see me finish up the route.  In hind sight I should have tried to re film the top section.  I will have to try a film it again next year as the conditions are getting worse there.

In anycase I did the first ascent!  I named it 'Bozemanator' since it goes over a summer route named 'The Bozeman'.  I was thinking to give the route a M6 grade but I added the plus(+) since the top section was quite tricky and I had to do some one arm pull ups.  Thanks to Juppe for being patient and also helping out!

Thanks for reading and stay tuned for updates! 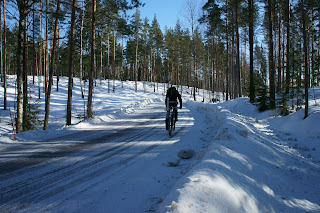 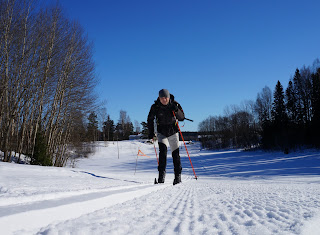 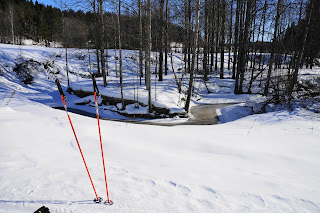 Posted by Unknown at 8:48 AM No comments:

I am still working on the video to our trip up north but I made a short bouldering video from today.  Today I climbed two new routes which were very nice!  The video shows me climbing the bit harder one.  Felt fun to boulder after so much ice climbing!  I hope you enjoy and stay tuned for more updates! =)

Posted by Unknown at 5:57 PM No comments: