This month has certainly been a busy one and nice to be mostly though the dark period!  Besides the everyday job applications I have been managing to fit quite a lot of activities in everyday.  I checked my logbook yesterday after climbing and noticed I have completed exactly 31ice climbing routes in the 31 days of January!  It is kind of funny because I didn't plan to do this but it sort of just happened.  It is pretty cool as most of those routes I led from ground up and most of them were new routes for me.  It is no wonder that I finally have started to feel a lot more comfortable ice climbing again.  Most of the routes have been about WI4 or so and that is also pretty nice. Thanks to all of my climbing partners and good company for getting so much climbing done. 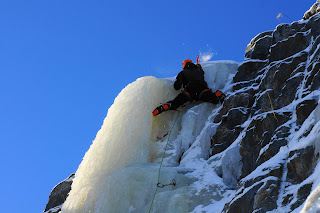 The rest of the time has been filled with some awesome skiing on the sea ice.  I have been quite a few times with Annina and also once I went with Hippo.  Hippo (Johan's families dog) is a Suomenlapinkoira breed which means Finnish Lapland Dog(http://en.wikipedia.org/wiki/Finnish_Lapphund)  It was pretty fun after we skied for a while but when we got pretty far out onto the ice Hippo got  nervous and wanted to head home.  It was geat fun however though and hope to soon get our own dog.  Otherwise I have got a fair bit of skiing done almost everyday and everyone asks how much I have done.  I haven't really kept track but have just been going out as it feels more natural just to ski with no set goals.  Once in awhile I record the route to see how things are going but otherwise it is just good to get out. 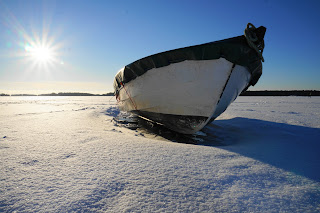 Last week I tried out my kite again on the sea ice.  It was great fun and it went pretty smoothly but soon it started to snow hard so I packed it in after awhile.  When I came ashore there was a channel 4news car sitting there.  It was funny as they were asking if there were more kiters out and asking if I was going out again.  I was the only one out since it was in the morning of a work day and the weather had turned quite bad.  I was ready for lunch and pretty tired so I declined and called it a day.  I think they might have had to wait quite awhile for someone else to come along.  Overall though the kiting session was a good success as I managed to keep a pretty steady pace and keep in control.  I still managed to get in a quick 30km.
In another funny note this month has been funny as I decided to have a alcohol free month.  It was actually pretty hard as it is nice to have a beer in the weekends in the sauna or something.  It felt like ages since I last drank a beer but I managed the whole month without, which I was surprised that I managed to do.  Along with all the other activities we have managed to play hockey a few times with friends which is always fun!

Overall January has seemed to steamroll past and seems like time just flies these days.  Perhaps it is just my old age but you never know.  I think it is important to live life to the fullest and know that you did something each day that makes the soul happy.  I am sure there will be more adventures soon to come!  We also hope soon to visit the summer cottage again!  Thanks for reading and stay tuned for updates! 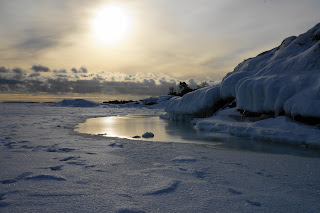