First Hiking and Ice Climbing of The New Year

Happy New Years to everyone!  It was a wonderful New Years Eve with our friends and a big thanks to Bella and Johan for inviting us again to their place in the countryside.  Now that the new years has started I have finally got a new camera.  It is a bit fancier, so I imagine it will take me time to figure out it's full potential.  It seems like I was just getting used to the last one before it was lost.  In any case the weather has been quite strange lately as it has been raining on top of the snow we had.  It is amazing how fast it can change as one day the sea can be completely thawed and the next it can be frozen enough to walk and fish on!  These next two pictures are only taken two days apart.  They are taken in approximately the same area near my house at the seaside.  Unbelievable! 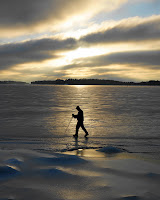 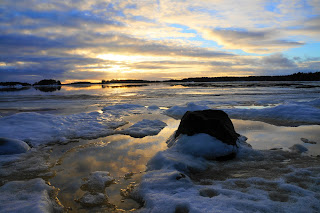 Since the weather was so atrocious Johan and I decide to head out for a small hike in the Sipoo National forest which is only a 10 min drive from home.  I managed to forget my memory card from the new camera.  Despite this I think this picture taken from the same day from home best described the conditions of the forest.  There was a lot of water in the heavy forest and quite a bit of snow in some spots.  We followed a 5km loop around a marked trail and then stopped at a Finnish Laavu(Wooden shelter) http://en.wikipedia.org/wiki/Lean-to.  We managed to get a nice fire going quickly despite having very wet frozen wood.  With some good teamwork we got the fire going maybe after 15minutes or so.  We then grilled some nice sausages and promptly headed out and finished off a very nice hike.  It was a nice day and we were lucky that it wasn't raining.  I hope to do it again sometime as the area is very nice.

Last Saturday the temperature dropped and we decided to head to Koulova for a spot of ice climbing.  Jody came to pick me up and with a full car with two Finnish friends we headed out.  There wasn't a cloud in the sky and we were hopeful the weather would hold for the day.  There was many people around at the crag as the weather was very good.  After not sleeping to well Jody and I decided to lead two ice climbs straight away.   It was a bit of a mistake for both of us to jump straight onto some 'not the easiest' ice climbs.  I was leading at the same time as Jody and he managed to get gouged in the lip with a piece of ice.  After some struggling through pouring water from above we both managed to top ouy okay although it didn't feel very comfortable at all.  Then we did some top roping to regain our confidence and then headed to another part of the crag. 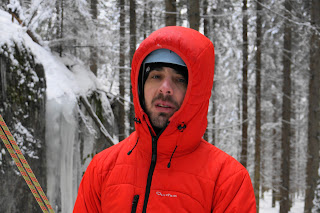 The second climb a WI4 I led felt a lot more comfortable although it was kind of scary in the beginning due to the fragile ice at the bottom.  I was relieved as i got into some stickier ice at the top.  Jody was again leading a route next to this one.  It was great fun and thanks to our Finnish friends for belaying us and being patient.  Overall the day was pretty relaxed and was nice to get out.  The weather seemed pretty good despite all the water coming down off the waterfalls.  That is quite apparent as there was a nice ice layer on my helmet by the end of the day.  I am sure glad I have the visor on the helmet!  I was also with my trusty 'budget' energy drink which it seems is quite nice for climbing. It was a great day out and we had good company. 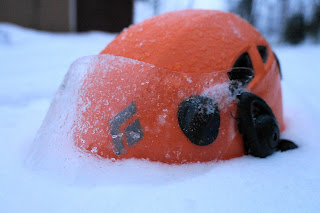 Then yesterday(Sunday) Annina and I went for a nice walk out by our house and it was so fantastic that the cold had returned.  We enjoyed the sun and had a very nice relaxed walk.  Overall the last week has seemed pretty busy!  This next week is for sure to be similar so stay tuned for updates!  Thanks for reading! =) 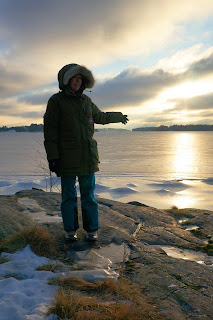