Winter has finally set in and we finally got a blanket of snow all in one day. It dumped about a foot to a foot and a half of snow.  Is pretty awesome feeling that winter has finally come as the scenery is that muich brighter now. Last Thursday Juppe and I sampled the first part of winter. Was an awesome night of climbing as I managed to lead my overhanging project which I graded as M6+ due to the pumpy difficult roof crux at the top. I named it Truck Stop due to the large cave and ledge at 2/3 height. It is an awesome route and was nice to finally lead it and was protected mostly with small wires. Would be nice to climb it again sometime in the daylight when I can see everything. We also led another easier route that was about M4. Pretty basic off-width crack but hard to protect and took awhile.  Good fun and was a nice evening!

On Saturday morning I awoke with a small hangover from the Christmas party from my work and headed out for a ski with Annina. We went straight from the house and went around through the forest next to the sea and by the horse farms. It was a kick as it felt awesome to be cruising around on skis.  It was also nice to see our new area in the winter which looks completely different.  Was beautiful and felt like Narnia as we cruised around the forest on our rock skis. 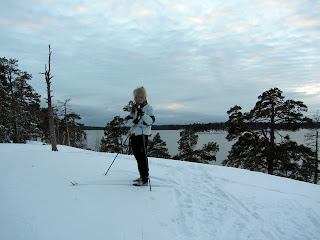 The next day Johan and I headed out to another crag to check the ice conditions. After a hefty snowshoe in we checked the area out. We found one place in the wall that looked like a WI2-3 ice fall that looked like it had formed. So I jumped straight on it without really checking it out. It turned out to be a muddy, snowy, and icy M4. Was pretty scary as the placements were quite thin. The top chimney also proved to be a small challenge in itself. I managed to get to the top though and then we top-roped what looked like a good route again. Once again it turned out to be a slippery fest with unconsolidated ice. Johan decided to wait until there was better ice but was really patient to belay me.  I think we were a few days to early but it looks promising for the weeks to come. After some nice snowshoeing on a beautiful sunny day we headed back.


Later in the eve I again went cruising around on my skis. Was a fantastic feeling to ski down the beach and along the shore. Was very dark but quite exciting as the terrain is constantly rolling and there are no groomed tracks. So much fun! In the next days I am sure there will be more winter adventures! This weekend Annina and I are heading to the cottage for four days for a wintery weekend! Can't wait! Thanks for reading and stay tuned for updates! =)
Posted by Unknown at 8:33 AM