Our Christmas at the Cottage 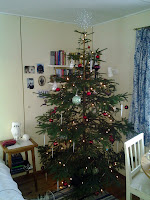 We headed to the summer(winter) cottage for the Christmas holidays.  It was just Annina and I, but we had six days off so we decided to spend a quiet Christmas at the cottage.  Although we were a bit bummed since I had lost my camera we still managed to get some pictures from our cell phones.  We also got some nice videos from my helmet cam which I will try to make some compilation sometime this next week.

In any case when we arrived it was a balmy -19'C(-2'F).  We skied in like normal except the sled this time must have weighed 100kg(220lbs)!  I am not sure but it was pretty heavy as we had all the Christmas food, Christmas decorations, and loads of wine and beer for six days.   Overall though it wasn't too bad and after 4 or 5 hours we got the house warmed up.  We immediately cut a Christmas tree from the forest and set it up.  It was fun as we found a very nice tree and we had enough decorations to decorate it.  =) 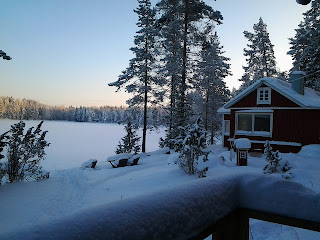 Then the next days seemed to pass by fast before Christmas.  We skied on the lake everyday and it was fantastic!  We also made a gigantic snow angel on the lake from our ski tracks.  The ice was surprisingly rather thick as two weeks before the ice was only 4cm(1.6").  Now it was 25cm(9.8") and really hard.  It was so hard that the ice drill had a hard time to penetrate the ice.  We also found that the wolves had come back for the winter.  I tried tracking them a few times as they made fresh footprints every night.  One day it was interesting as there were fresh sets of moose tracks and the two wolves were tracking the moose.  I didn't go to far but followed the track for awhile on my skis. Someday I hope to catch a glimpse of them!  The neighbor saw them once last winter so hopefully! It was good fun and it was fantastic weather!  It was the first time we had seen the sun in over three weeks!  It was a bit funny though as we had to ski to the other side of the lake to get any sun.  At noon the sun was barely above the trees.  Then at 12.40 or so the sun set.  It was fantastic while it was up! 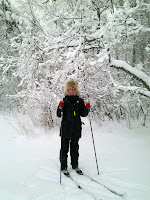 Then just before Christmas day we made a nice Gingerbread house from scratch.  It was good fun as I haven't made one for many many years.  Then for Christmas eve dinner instead of the traditional ham we made a nice beef roast.  We also added some spruce to the roast for a nice flavor.  It turned out to be awesome and was very good.  We also had made the traditional Christmas porridge for the morning.  Every day we made the sauna and it was the same on Christmas day.  We made the sauna listened to Christmas music and drank Glög(Hot mulled wine).  It was very relaxing.  It was a perfect Christmas.  Then it seemed that the six days just whizzed by and it was time to go.  We packed up full of good memories and food and headed home. 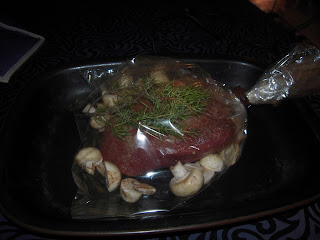 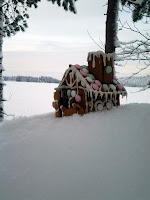 Overall we were very lucky with the weather and it was just wonderful to spend Christmas at such a special place.  I sure miss all of my family though and hope soon that I could spend Christmas with them again. 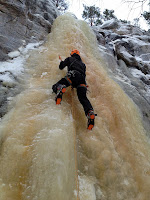 Then last Friday after we had come back Juppe and I headed to Solvalla(Nuksio) to do some ice climbing.  There was some nice easy ice falls to climb and the ice in general was pretty okay although a bit fragile due to the big temperature changes.  Even though I had finally got a new camera I didn't take it but Juppe got some nice pics from his cell phone.  It was a fun day and can't wait to get out again!

Thanks for reading and I wish everyone a happy new years!  It sure has been an interesting year in 2012!  All the best to everyone in 2013!  Take care and stay tuned for updates! 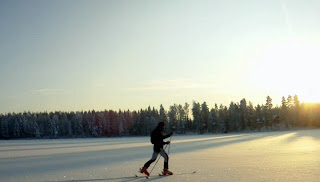 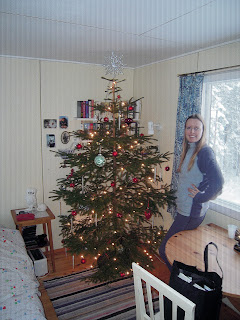 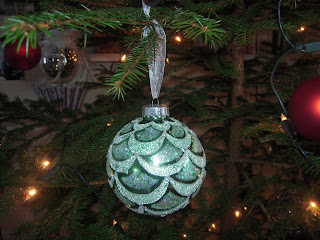 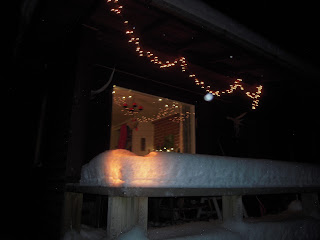 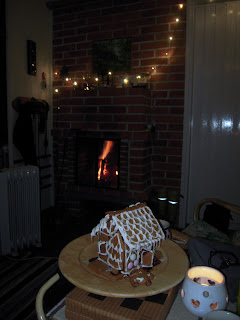 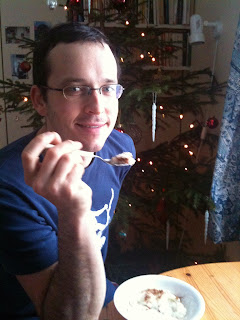 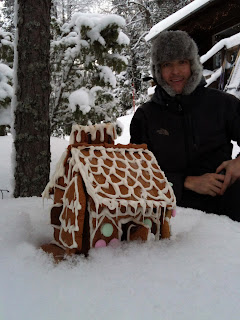