Burnt at Sea and Silly Stumbles

Almost two weeks ago we went on a kayak weekend trip to Skorvan.  The sea island is located in the archipelago of the Espoo area near Helsinki about 26km (16miles) away.  It was a pretty interesting trip and felt much harder than it did two years ago.  Juha and I started late Friday evening frantically packing the kayaks between intermittent showers.  At the last minute Henna joined us as we headed off.  We were quite lucky as we paddled in between three storm systems.  We even had sun for awhile.  The first 5km were really hard for my shoulders as I guess they were just warming up and i hadn't paddled in awhile.  It also didn't help that I had a full climbing rack in my kayak as well with loads of water and beer.  It was going fairly good for awhile but it seemed my kayak that I chose was a pretty slow one.  In any case, slowly the kilometers ticked by. 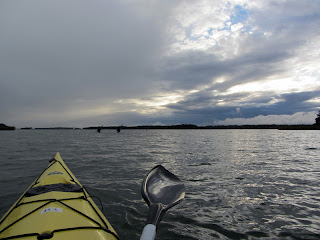 With about 10km to go the darkness really set in.  It was a bit scary as you couldn't see the waves coming but only knew they were coming by the sound.  It was a bit nerving as some of the waves were crashing over the top of the kayak.  We all stuck together really close and at some point with about 5km to go we got a bit disoriented and lost our way.  With some careful checking of the surroundings after a few minutes we were back on track.  Once the island came into sight it seemed like the last few km's just went forever!  Seemed like it was never going to end and I was completely bonking.  Finally we landed and quickly went straight to the sauna.  The first beer never tasted so good!  After a nice sauna and swim we pitched our tents and quickly dozed off after some grub. 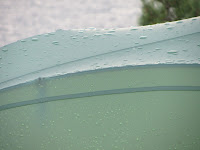 The next day it was quite hard to wake up.  It was raining all night but in the morning there was beautiful weather.  So I decided to go check out the climbing wall.  It was  a little bit shorter than I remembered but still kind of at an awkward height.  So it ended up being more like high ball bouldering.  I did four fairly easy routes (font5-6a) and cleaned as I went.  It was pretty fun but didn't last long as the rain started coming down intermittently between the sun.  The day sort of just zipped by even though I didn't really do anything.  As the day went by more and more people from the club started showing up at the island.  Soon there must have been 50 people all on the island.  Thank goodness it is a pretty big island as everyone was in their tents. 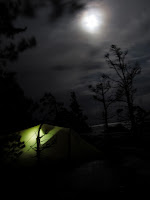 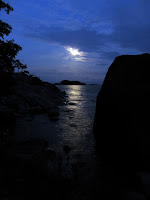 Then it was time for the sauna again.  This time though there was so many people inside we were packed like sardines.  It was a bit claustrophobic so I had to go out.  I was coming down the steps and when I thought I was stepping on  step it was only air and I tumbled forward.  I hit the side of the sauna stove with a sizzle and jumped up very quickly.  Everything seemed fine until about 10 minutes later it felt as if someone was frying my back and arm.  I sort of seared my whole arm and a good part of my back.  It was so painful I couldn't do anything for awhile.  Eventually after some beers I managed to curb the pain and go join the bonfire.  It ended up being a pleasant evening despite being fried.

The next day we slowly packed up and got going back to Helsinki under some very nice sunny weather.  I was a bit worried about how the burns would feel to paddle with them.  Luckily there wasn't really any pain and the trip back was pretty uneventful even though my shirt was glued to my skin when I got back and took a tricky peeling operation to get it off.  Overall it was a very fun trip and nice to see everyone!  It was really nice of Juha to be so patient as he is quite a fast paddler.   Nice to spend some time with him too! 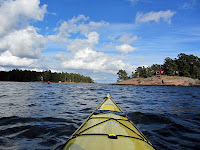 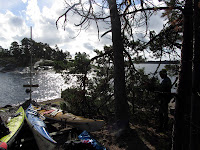 Then last week after my burn finally healed up I went out climbing with Juppe again.  I managed to lead another 6c sport climb called Jätkä.  Then afterwards I decided to give this one trad route a go despite being stumped the week before.  This time I found a micro foothold which opened up the whole route for me and I found 3 very good gear placements.  The route is called Spiderman which is E1 5b which actually seems pretty appropriate but on the upper end.  Was a great day again thanks to Juppe until I was riding home.  Was a bit silly rather as it was dark and I had a 30kg (66lbs) backpack on.  I came to a corner at a intersection and realized I could go and ripped around the corner except I ate gravel.  It must have been the extra weight as I have been around that corner dozens of times.  In any case I jumped up a bit embarrassed and rode home.  I didn't think anything was too wrong except when I took off my knee warmers I found that my knee had been gashed really good.  There was a huge open flap out open below my knee cap that could have used stitches.  I used butterfly stitches instead which worked pretty well.  Such an idiotic stumble as it ruined the plans for the last week as I have been trying to get it healed properly.
Overall besides my stupid stumbles the fall season definitely has been setting in as well as the darkness!  Seems like the days are getting so ever short.  Already wondering when the snow and ice will come!  Thanks for reading and stay tuned for updates!

Today was the Finnish Cyclo-Cross Championships in which two of my new teammates (Team Velocitor)were taking part in.  I was helping out in the pits and cheering them on.  The course was in Hensinki and was pretty hilly with a lot of twists, turns and mud.  The day was a cold brisk one although there was a nice fall sun shining though the clouds.

The race began with Roope Nurmi and Kimmo Kananen going straight to the front. Kimmo hammered away and after about half a lap and quickly opened up a gap. Roope meanwhile had some bad luck as his saddle slipped down and he had to come in for a bike change. He had already fallen quite far back and soon abandoned the race. Kimmo meanwhile opened up a big gap of about 30seconds halfway through the race bunny hopping the barriers along the way. Samuel Pökälä in 2nd place was fighting hard back after his own first lap misfortunes of a flat tire. Despite Kimmo hammering away he slowly crawled back to Kimmo with 2 laps to go. Kimmo fought hard to follow and rode valiantly to finish up 2nd about 10 seconds behind the winner Samuel Pökälä. Overall it was a successful day out and Kimmo rode very well.  Was nice that Johannes helped out with the pictures and kept me company too! =)

Thanks for reading and stay tuned for the kayak trip report!  Congrats Kimmo!

Climbing Progression and Some Cottage Fun! 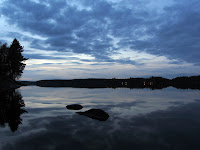 The last month has been a very busy one as I have been trying to apply for jobs and also write a business plan.  In the meatime I have been climbing quite a bit between the work.  Mostly I have been having some good climbing adventures with Johan.  We have been exploring and cleaning new routes which hopefully someday other people will climb.  It has been great fun.

Overall my climbing has been increasing in the grades.  In the bouldering grade I sent my first 7a+ (Hanoi Rocks) this summer which is almost a grade higher than last years effort!  So I was pretty stoked when I managed to send the problem even though I did it a different way than most people.  A lot of people climbed the route statically but I couldn't manage to do it that way.  So after many tries I just tried to dyno(jump or long move) to the top and it worked out!  A little risky since I was alone without any pads but it seemed to work out fine.


A few weeks ago I went out climbing with Juppe and had one of my best days this year!  Firstly I led my first official E3 (about 5.11a) traditional(placing my own gear)  route called Shell Super at Rollarit.  I was pretty excited as its not the easiest route around.  Then afterwards I unexpectedly led my first sport 6C(5.11b) Esko Mäkelä ground up on-sight.  It was pretty cool as it just seemed to happen.  The bottom again was this gigantic dyno which seemed pretty easy and stuck it the first try.  Maybe dynoing in climbing is my thing?  Was pretty happy with the effort as my grade in rope climbing seems to be improving as well.  It was also a joy to go watch the Banff Film Festival in Helsinki.   It was great fun thanks to Juppe and there were some very inspiring videos.

Two weeks ago we had a couple friends(Paula and Nikolas) over to our summer cottage for the weekend.  It was great fun and we managed to find a lot of mushrooms.  Despite this we got attacked pretty bad by the moose flies.  After a trip on the boat to this island it took us nearly 2 hours to remove all the moose flies from all the clothes and hair.  It was quite a project and a bit funny as everyone was jumping around a boat for two hours.  Then we enjoyed the evenings giggling by the campfire after nice saunas.  It was a very nice relaxing weekend and despite fishing and almost catching a pike we didn't manage to catch anything.


A little over a week ago I had a funny adventure with kayaking in the sea... I will report soon!  Thanks for reading!  Stay tuned for updates! =)
Posted by Unknown at 1:34 PM No comments: