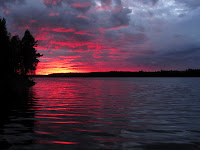 It has been a while since I last posted something as I have been recently quite busy.  In anycase our summer vacation was a wonderful one in which we stayed nearly a consistent month at the cottage through the summer.  The month seemed to whiz by which is strange because we generally didn't plan anything.  We always woke up and did whatever we felt like doing.  It was nice though as Annina's relatives both from the US and England were there for most of the time.  It was great fun to spend time with them and despite the wet summer weather we still managed to get out and do things everyday.  For example I went fishing with John in the rain and we both caught two fair sized pikes.  Was great and we filleted them up and I smoked one and John fried the other.  Annina and I had also brought our bikes with us and went riding once in  awhile.  It was great fun to go down some roads which our car would not fit. 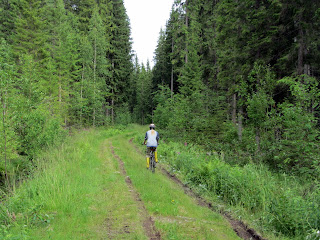 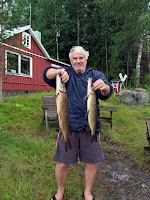 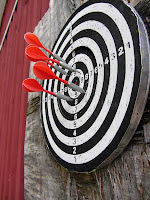 As always we played darts whenever we were grilling.  Of course the first time I threw was the highest score I got for the summer of 39.  When there was a lul in the rain I decided to take advantage of the weather and head out for a small trip to the other end of the lake.  I used Erik's old wooden kayak from his childhood and had a great time.  It is about 8km (5 miles) to the other end of the lake and I saw lots of birds and things.  Was great and the weather turned fantastic!  I also scouted the exit river of the lake if it was possible to kayak down.  I went down the small river for about 1km before turning around.  It was pretty interesting as I am planning a trip with Annina's brother in the spring to go down these small rivers for a few days.  Overall the small trip was awesome! 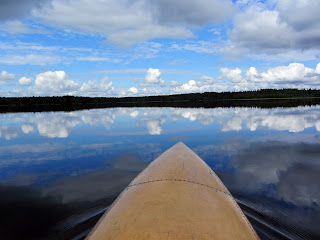 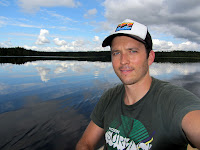 Since the weather was so wet there was an abundance of blueberries and mushrooms everywhere!  So many that it would have been impossible to pick them all unless you were an entire army.  So Annina every few days it seemed made fresh blueberry pie!  Then once in awhile we collected enough Kanterell mushrooms for some great eating!  We made different sauces to go with either potatoes or white bread.  Was fantastic to have the fresh things and flavors everyday. 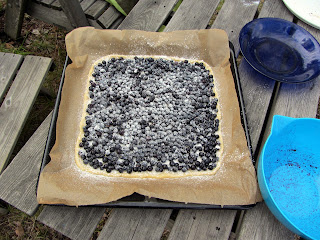 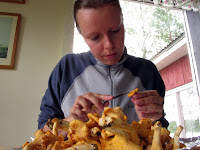 Annina was one of the few to swim every morning despite the weather.  She even went swimming when it was very cold and rainy.  Then we did a lot of small projects around the cottage.  One project we reboarded and overhauled the old rowing boat with Allen.  It took us a little bit of planning but when we did the work it took about a day.  It turned out better than we though and also restored it back to working use.  We also had a big wood project this summer in which we cut quite a few trees that were half dead.  It was quite a big project and lasted a few weeks to split all the wood.  Along the way there were these funny beetles that kept visiting us.  They were of all shapes and colors.  Funny little bugs they were. 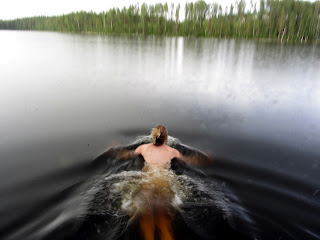 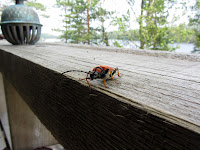 There were a few days which was fantastic weather in which we had wonderful sunsets.  On one stormy day I went out on Allens Windsurf and had a blast ripping around the lake.  Had quite a few spills but in general it seemed to go well.  Whenever there was a spare moment I was spearfishing or then regular line fishing.  Although it seems whenever I line fish, I manage to catch more trees than fish. Really was great on those days.  It felt like everyday the long days were fading fast.  Then at some point it got dark enough to see the moon for the first time since spring.  Was somehow a funny feeling after having so much daylight all the time. 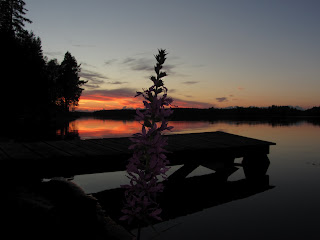 As the summer light and our vacation was fading we had a great crab party with Annina's family and had a few friends over for the last weekend.  The crab party was great and we had a good time drinking schnaps and singing songs late into the night.  It ended up as a little disco inside the house with all of us dancing the night away.  It was really funny and we had a great time.  We then also briefly joined our neighbors crab party before our friends arrived.  It was great fun with them.  Johan and Denis were a great help in trying to get the hugs stones out of the road.  It was a pretty big job which actually took longer than we expected.  We still had a great time and a great evening with them.  It was great that they could come and join us our last weekend. 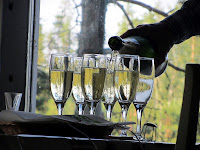 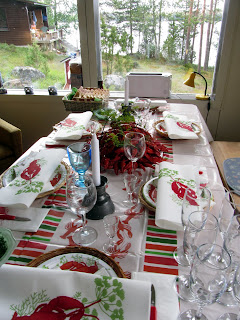 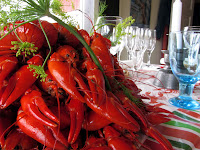 As our summer vacation drew to a close it felt as if we were leaving home.  It was a very relaxing time and was great to spend almost a whole month there.  Grudgingly we headed home but full of memories and wonderful times.  Was relieving to know that we soon would be back in a few weeks.  Thanks for reading and stay tuned for more adventures! 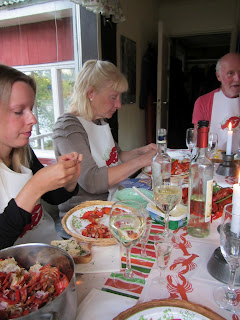