A Week of Adventures with Johan

Over the past week or so Johan and I have had some pretty funny adventures.  Sometime at the beginning of last week we decided to try and fly our kites.  We went to Tuusula on the lake and despite the forecast for strong winds ended up with a dud.  So instead we looked for some roads that had enough snow to do car snowboarding.  We didn't really find any due to the rocks laid down on top of the snow.  After our unsuccessful searching we decided to head to Kerava where there is a big hill and do a little snowboarding.  Good fun and saved the day!

The Next day we met to play hockey with Johan and Anton.  It was awesome and we had a really good game.  Felt really great to play some hockey again! =)

Then later in the week Johan, Jocke and I tried our kites yet again at the same place.  We were schooled again by the wind and then we ended up in Kerava again!  This time though after snowboarding a bit I decided to try out my new Scarpa Ski mountaineering boots with my skis!  They worked brilliantly and I even managed to downhill ski pretty good although I still feel more comfortable telemarking with them.

Between all of these things I got some cross country skiing done from my front door.  It has been pretty good now to ski next to the sea and through the arboretum.

Then after a break in the weekend and some ice climbing we decided to give our kites another go on Tuesday.  We decided to go to the farm fields near Vikki since it is close to the sea and should give a pretty good breeze.  We arrived with a brisk wind and it looked good!  An hour later and lots of cursing I somehow couldn't get my kite to stay in the air which was strange due to the strong wind.  Then after some careful evaluating I found three center line power settings and set it to max power!  Then both of us managed to fly across the field pretty quick just sitting on our butts!  Probably looked pretty funny!  then I tried the snowboard and for awhile was flying the kite with my face in the snow.  Then finally at the end I managed to fly across the field pretty quick on my snowboard! =) 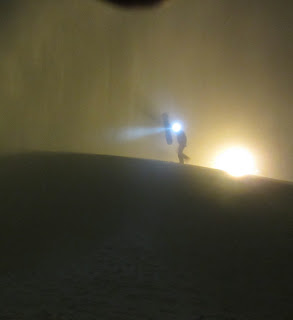 Finally after so much struggling we managed to fly our kites properly!  Now we just need more wind and the sea to freeze.  can't wait for more kiting adventures!  Unfortunately we didn't manage to get any footage or pics of our kite flying adventures.  Next time we will for sure though!  Yesterday we had a good session of ice climbing...more to report later! =)

Thanks for reading and stay tuned!
Posted by Unknown at 1:52 PM