Last weekend Toby, Jody, and I went to a place called Muurla in Salo.  The day started off fine with a quick coffee break at the gas station.  Once we arrived we got packed up and walked down the road a few hundred meters and then started crashing through the snow and the forest.  The stream that was normally frozen was completely open and too big to jump.  After some searching we found a felled tree that crossed the stream.  After a balancing act and some humorous shimming along the tree we all three headed to the cliffs.  There was quite a lot of ice around although apparently not as much as normal.

Toby decided to lead the first line up this formed ice sheet.  He seemed to be doing okay but then he reached a section where the ice was hollow so he decided to traverse around the side.  Jody and I in turn seconded the route which felt good.

Once on top we decided to set up a top rope for this short but steep route.  They did a few laps on the steep ice where as I only went up it once.  It felt okay but maybe I needed to get a little bit more training in.

The next route we decided to top rope as well.  We had no idea of what the route was or how hard it was going to be besides that it was going to be mixed.  I went up first and realized that the first section was already overhanging.  I managed to jam my ice axe into anything I could find.  The bottom section felt okay.  I then found a spot where I could sort of rest although it was not the best spot.
The next section felt even more like a struggle as it was overhanging again but again I managed to jam my whole ice axe into the rock.  I then used the blade as a handhold.  Seemed to work pretty good but once I got over the overhang the route was basically done if I could just swing my ice axe into the frozen ground.  With no strength and some frantic swinging I managed to get a purchase and clambered up.  Pretty happy that I was able to do the route clean.  Then Jody and Toby went up the route after me with a similar struggle.  We didn't know what to grade it but M6+ seemed to fit pretty good.

After that epic route we decided to take a small coffee.  After our little break I was keen on leading something.  So we had a look at this fairly easy groove up the wall.  With a few tips from a local guy who just went up it I started off.  I got two cams into the exposed rock in the bottom.  After that there was only the chocked up ice crack in front of me.  I struggled for the longest time to put a ice screw in to realize that one of the blades was completely flat!  Then I realized I had forgotten to bring quick draws!  So I down climbed a little ways and Toby threw some up.  Once I got them I got two 'okay' ice screws in and went to the top.  At the top I got a nice long ice screw in and felt relieved and then belayed Toby up.  It was all a bit of a sketchy lead mostly my fault but it was still fun!


We packed it in and followed a better trail out me flopping through the trees with my mountaineering skis.  Once we reached the car we shoved it out of the snow and headed home.  The warmth immediately set in and I dozed in the back seat on the way home.  Thanks to Toby and Jody as it was a great day out and hope to get out again soon!  Yesterday we flew our kites again and this time successfully and will report soon!  Thanks for reading and stay tuned! =) 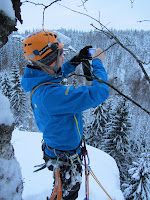