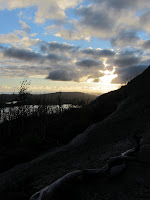 One week ago I went to visit my Austrian friend Michael in Bergen, Norway for 5 days.  When I arrived there the weather was splendid once again.  This was I think my 6th time being in Bergen and every time I had been there it has been sunny.  I always thought this a bit funny as it's supposed to be the rainiest city in the world!

Once I arrived I waited for Michael at the local coffee shop.  I forgot how much the prices are in Norway! :P  After a 20€ sandwich and coke he finally arrived after his classes.  It was great to see him as we haven't met since almost 2 years ago!  We immediately decided to use the nice weather and go straight to this climbing wall in Morvik.  After a pretty short ride on the bus we arrived at the wall.  Although we could see the large 92meter (300ft) wall we soon realized it would still take about an hour to reach the bottom.  There was no really clear trail so we ended up bushwhacking through the brush and rock gardens.

Once we had finally arrived at the bottom we quickly got ready to climb.  I gave Michael a quick briefing on how to use the rope ascenders and also to belay me on lead.  I was pretty nervous since he has never belayed someone before.  So some very tentative and overhanging climbing led me to the first bolt at about 10meters. 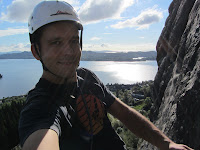 I clipped in and gave the rope some good jerks to make sure he would hold me.  It seemed he got the idea and then I relaxed a bit.  Although as soon as I started climbing above the bolt I realized there was no more bolts and a lot of blank rock!  I ended up climbing the next 15meters without any pro.  Not a very good feeling although the climbing was pretty easy.  I got a cam in a bad placement which gave me some kind of comfort.  I continued up and at about 35meters I finally got a bomber cam in.  Once that was in I cruised relaxed up to the first belay anchor. 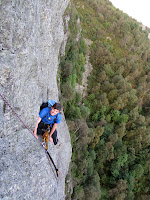 I relaxed and tied the rope off to the anchors and michael started coming up.  I guess he had a little trouble with the rope ascenders.  What should have taken 5-10 minutes ended up taking an hour and a half.  Even so he was a trooper and kept coming up.  It didn't matter actually how long it took as we were having fun anyways.  Once I had him tied off and me on belay again I started heading up the next pitch.  The protection again was awful but somehow I felt relaxed as I knew I wouldn't hit the ground from here.  The first 20 meters of the next pitch I somehow placed some small wired nuts in the crack but not sure if they would have actually held a fall.  After the first 20 meters I finally got a bomber cam in and then I cruised up to the top of the 92m(300ft) cliff.  My first official Norwegian climb was done although it was a rather easy one. 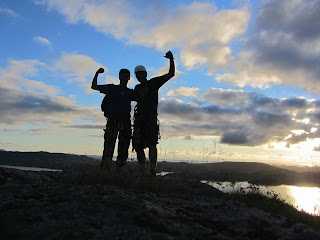 After waiting almost an hour and a half again Michael arrived just before sunset.  Good that we both made it!  I was hoping to do another harder route here but we ran out of time so we quickly descended down before the darkness set in.  Once we hit the ground we quickly hurried through the brush back to the road and after a bouldering problem on top of the bus stop we caught a bus to his house.

The next day we decided to go on a small adventure.  Michael had asked around and found some DNT huts that you don't need the key for.  A bit silly as I had the key back in Finland.  In any case it was a bit rushed as we departed in the afternoon with his friend Artur from Brazil.  We all three arrived at a small town called Dale with a population of 988. 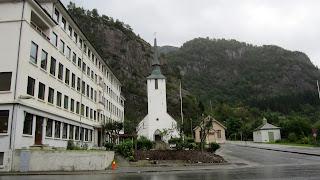 It seemed much more of a town like 200 people and was a bit strange when we arrived.  This small little picturesque town was booming with disco music!  Strange as we couldn't really tell where it was coming from as it was bouncing off the mountain walls.  Once we found a room to stay in we found out it was a children's disco.  Pretty funny as you would think it was a real disco from the sound of it!  The place where we stayed had a small pub downstairs.  Luckily for us there was almost all the people from the town there!  So we had a good time and met a lot of funny local people.  All of them were very nice and Michael and Artur seemed to get more and more nervous about the hike and the rain.

We awoke pretty late and started off to look for the start of the trail.  After asking a few people they kept telling us to get a map.  I knew the general direction so for me it didn't bother me that much.  Once we started it was the start of a long rainy day.  We climbed for the next two hours to almost 1000meters(3280 feet) above the town.  Michael and Artur looked pretty tired from the previous evening but kept coming up the mountain. 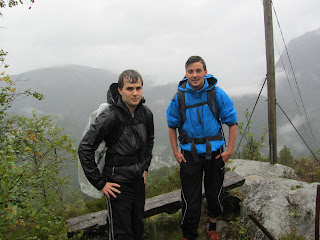 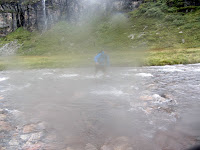 Once we arrived at the top we found the vague trail heading in the direction of the cabin.  I was freezing all the time but could not really figure out why as I was wearing quite much but I thought it must be the rain.  The trail was marked with the normal red T's and I went ahead to find the way.  It seemed I just got colder and colder but really couldn't figure it out!  We got lost twice and then backtracked to the trail and continued on.  We finally came to some cabins that I thought might be the right ones but they were locked.  We saw a sign towards Høgabu and tentatively continued on fording probably about 12 small rivers on the way. 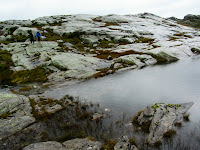 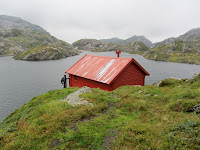 With fog setting in, the red cabin of Høgabu beamed into sight and we finally made it after another half an hour.  We quickly started up a fire in the stove and tried to warm up.  We decided to check the GPS on how far we had walked.  It was 16.9km and it took us 8h20min!  Then I saw my stopped time meaning the time I was just standing in one place... It read 3h15min!  No wonder I was freezing if I was stopped for that long!  Both of them did very good as they kept going all day without a break and made it!  It was a bit funny walking all day though a scenery like the Lord of the Rings and seeing random sheep running everywhere. 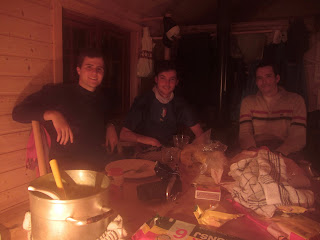 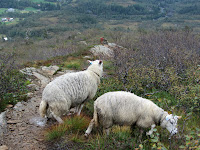 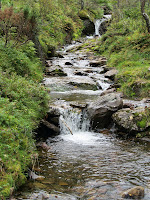 The next day we had two options and I decided for us it was better to take the shorter and easier one so we didn't have a repeat of the day before of maybe making it or not.  We made quick decent of 400meters in an hour and a half and reached the small mountain road.  We soon realized it was going to be a boring 10km walk downhill to town to catch a bus. 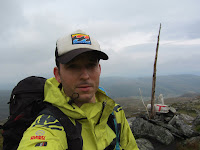 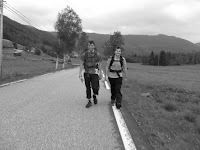 So after a little while we tried to hitchhike from the cars coming down the mountain.  Luckily two guys coming from their cottage picked us up.  They asked if we lived in Dale...and we said no we (Michael and Artur) live in Bergen.  Then they said they were going there anyways and offered us a ride.  It was pretty good luck.  They told us some pretty funny stories about Ole Bull which used to live right across from the one guy. 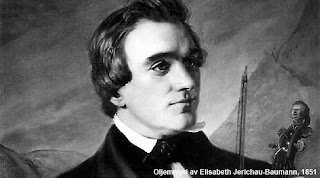 http://snl.no/.bilde
More info on Ole Bull
Aparently he used to be quite a womanizer and bought his own island and built a small palace on it.  It was pretty cool as we were able to see it straight from the guys house.  They told us that he had paved his roads with small white pebbles and used to ride a black horse and call out to the girls.  Apparently the girls loved it but all the guys in the area didn't like him... surprise!  It was all a bit random. 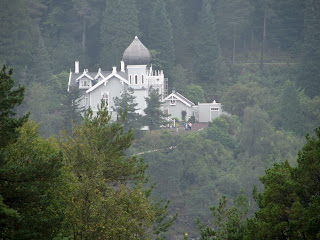 Once we had dropped him off we continued with the other guy whom was an engineer himself so we talked quite much.  I should have perhaps asked him for a job but I decided not to at the last minute.  After he dropped us off and refused our gas money we headed home in good spirits.   The whole adventure was a lot of fun and was great to spend time with Michael.  Reminds me of the old random days when he was here in Helsinki.  Was also nice to meet Artur and become friends.  The next morning feeling a bit tired I quickly left for the airport after a short breakfast.

As I took off I felt as I was leaving the mountains to which feels so comfortable again.  I hope soon to be living back in the mountains! =)  I have to thank Michael for a fun trip and hope to do it again soon!  Thanks for reading and stay tuned as soon we head to Spain next week for another adventure!
Posted by Unknown at 3:37 PM