Greetings!
My last weekend started out rather relaxed indoors as it was pouring all day outside.  I contemplated going out anyways but never really managed and got sucked into the couch.  On Sunday the weather cleared up and Illari came and picked me up to head to for a quick climb to Rollarit.  There I climbed some pretty easy routes which included one solo called Hylly to make a top rope for a harder climb.  It is very easy route but none the less is quite fun. 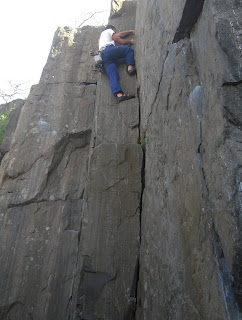 Then once the top rope was set up I did this harder climb which is a E3 trad climb called Super Shell.  It went fairly ok but looked pretty scary to lead!  We just dinked around for the rest of the day playing on the rock.  We called it an early day and headed home.
Today after some long work hours I headed to Taivaskallio for some easy bouldering.  It was pretty fun as I met this big group of people whom were great to talk to!  Then I climbed a new route called Hakahalkeama, which was supposedly the first bouldering problem in Finland!  Crazy fun!  Once I climbed a few more problems I zipped home. Now am getting ready to take off for mid-summers weekend and head to the summer cottage! All the long hours so I could have a 4 day weekend will be worth it!  I am sure there will be some fun adventures that I will have to report about during mid-summers esp since the sun doesn't really set!  Until then thanks for reading and stay tuned!  Take care and a happy mid-summers to everyone!
Posted by Unknown at 7:20 PM