Relaxed Weekend and a Week of Climbing

Last weekend was a very relaxed weekend as on Saturday was Robert's graduation party and on Sunday was Annina's birthday.  On Saturday the car seemed to not want to start so we decided to take the bus for the morning brunch at Robert and Ellu's house.  We stayed there for a few hours and then headed home.  The weather was really nice so we decided to come back for the small party Robert was having.  We decided to ride our bikes along the beautiful Vantaa river. 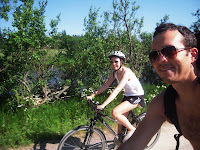 It was fantastic as I had many memories as I used to spend a lot of time there.  It was also really nice to see everything so green and see all the flowers and such.  The ride was pretty short at 16km one way but we took our time and was just having fun.  I also had a huge backpack full of beer and Annina's things.  It was really nice and relaxing.  Then once we arrived after a quick sauna we enjoyed the small get together to celebrate.  We had some very nice conversations and then when they headed to the bar we decided it was time to cycle home.  With the midnight sun it was really beautiful.  The weather was a calm cool and the breeze felt really good after such a hot day as the cool air came off the river.  The ride home just seemed to zip by and suddenly we were home.  Really a great feeling once we were home. 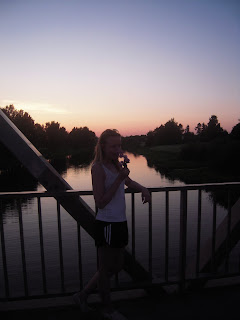 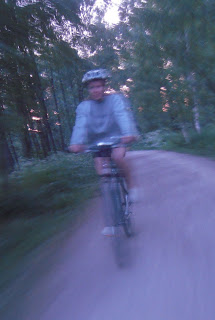 The next day was Annina's birthday so we decided to have a small celebration just the two of us.  We sort of just were laying around the house and on the porch most of the day.  Then later in the evening we decided to try and cool off so we went and sat next to the sea.  We were watching all the kingfishers fishing and was a really nice way to spend the evening.  Once we came back we indulged ourselves with fancy wine, crackers, and cheese.  Of course I also had to sing her happy birthday although her 'cake' was an rather unusual one! =) 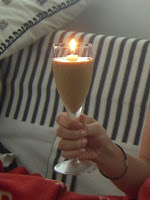 This week I got a small renewal contract for my research so I was back at work again.  but on Tuesday evening Christian and I decided to go climbing.  We tried this spot that I have been looking at for a long time but when we got there the rock was a bit too rotten and brittle.  When we were just looking around and some of the holds were snapping off without doing much.  So we decided it was to dangerous and headed to this nearby local bouldering place called Pihlajamäki.  I surprised myself by easily warming up with a font 5 bouldering problem.  Then somehow I managed pretty easily a 6B straight afterwards.  The day continued like this as we ran around the cliff climbing as if we were two kids exploring the world.  We were lucky with the weather as it was quite threatening all the time. 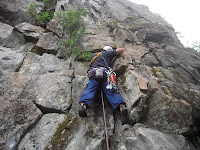 On Wednesday one of the last days Christian will be around we decided to head to this place called Luhti.  We were surprised that it was down these small dirt roads and pretty remote.  Once we were there we didn't know the proper way to reach the cliff so we plowed through the forest and hopped a small creek in the process. Once we were there we found this quite impressive cliff. 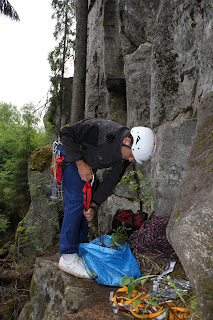 The first route which we climbed was only rated 5a but was this steep trad climb...meaning I had to place my own protection.  It seemed somehow pretty hard for a 5a but when I came down I realized why it was somehow harder.  The route was a bit overhanging almost the whole way!  For some reason I thought it just went straight up.  In anycase I managed it cleanly and then proceeded to top-rope two other hard sport routes.  Then we did one more easy trad route while doing the mosquito dance.  Towards the end of the last trad climb it started to rain so we called it a day and headed back home.  We quickly found the correct path and was much easier leaving the cliff.  I will definitely have to come back to visit the cliff as there is a lot of climbing still to do.  Such a peaceful place with the small creek and almost complete silence except for the normal buzzing of the nature in the forest.  Nice after climbing a lot next to some busy roads!

All in all it was a pretty interesting and busy week.  This weekend should be something similar.  We will have to wait and see as the weather might not cooperate.  I know for sure I am looking forward in a weeks time to mid-summers!  Can't wait!  Thanks for reading and stay tuned for my weekend update!
Posted by Unknown at 10:18 AM