Midsummer and a Bird Rescue Operation Midsummer's was fantastic as we spent four days at the summer cottage.  Annina and I left on Wednesday evening after our work and headed for the cottage.  When we arrived we were greeted by a really nice sunset and some fantastically warm weather. 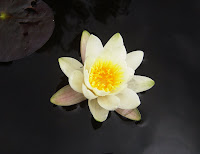 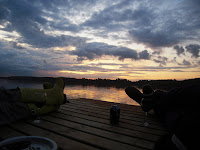 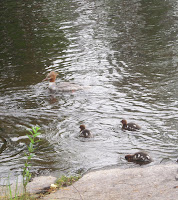 The next morning we awoke and had a nice relaxing breakfast.  The weather was okay and I wanted to try and extend the old 2nd dock a bit to see what  it was like.  So I took this floating island that her uncle had made and I rowed it over to the end of the dock and anchored it down.  We were greeted by beautiful lily flowers and these mohawk ducks.  Fun to see them and the little ducklings.  Now with an extension we could see the sunset around the trees better!  Also was nice to drink a nice glass of wine after dinner and relax.  The next day was filled with just putting around until Annina's family started showing up.  It was nice grilling and going to the sauna all together.  The evening was spent chatting away and we turned in with a relaxed feeling ready for the next day despite the awful cold rain and windy weather. 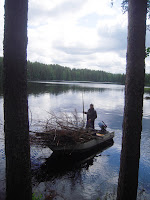 The next day we were hoping for good weather as it was midsummer eve.  We were in luck as the weather was pretty reasonable.  It was partially cloudy and quite pleasant.  I started my day by loading up the motor boat with some trees to contribute to the lakes huge bonfire on this small island.  Every cottage on the lake comes there to add some wood, old beds, etc.  Once that was done I decided to just enjoy the rest of the day so the first beer was cracked pretty early.  Then some more family members arrived as there were quite a few of us.  We had the traditional brunch on the porch which Annina's dad graciously provides every year.  Markus also brought some homemade smoked fish which was really good.  During dinner we had some toasts with snaps and sang a few songs. 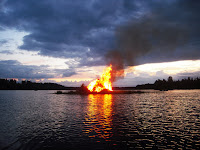 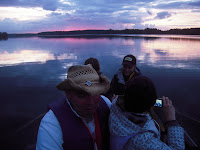 After the brunch we headed to the sauna and some really nice swimming to cool off as the lake is only about 10 meters away.  The water was only 18C but felt really nice.  With a happy mood all around and a few beers more it was time to grill the evening food.  We filled our bellies to the brim and then realized it was time to head to the island to watch the lighting of the bonfire.  Only the young un's went in the boat and we enjoyed the fantastic fire in the most impressive sunset.  The bonfire raged in a huge fashion at almost 5 meters (15 feet) in height.  In the tradition of the lake the usual silence of the finns was broken as we greeted all the other boats and then departed back to the cottage.

Once we arrived back we lit a small fire near the shore and chatted the night away again with some more beer.  What a most wonderful midsummer eve as we remember fondly when my Austrian friend Michael was here two years ago the weather was atrocious. 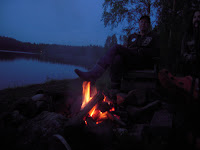 The next morning we awoke to again problems with the seagulls.  I am not very fond of them but when I saw this baby chick on the ground shivering so helplessly I melted.  I decided immediately to climb into the tree and return it.  I pulled out my ice climbing gear and headed up the tree.  Everyone was concerned that they would attack me.  but once I reached the top of the tree I lowered the rope down and Annina put the chick in a basket.  I raised the little guy up and the nest was quite far out.  So with a washcloth I grabbed the little guy and swung out on a sling and almost dropped him but he managed to jump atg the last second back in to join his brother and sister.  With a sigh of relief that the mother accepted him the troubles were far from over.  After that we had some fun picture taking with Annina's brother Robert.  It was pretty fun and the pictures he got looked realy cool.  The day ended again with a fine sauna and some more grilling. 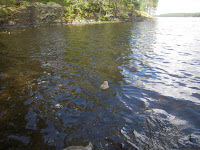 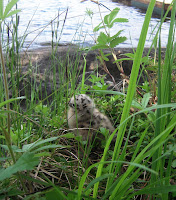 The next and last day was again fantastic weather.  We sort of moped around again until we realized the chicks decided it was time to come out of their nest.  We saw them drop the 10 meters(30feet)to the ground and then the first two swam in the direction of their calling mother.  The third one was the little guy we had just saved earlier.  He plopped down and when he got the the waters edge his foot got stuck in the grass and he was hanging upside down.  We helped him once again and he managed the big swim to his mom but when he got to shore he took a good 15 min to climb the rock.  He looked a few days behind his brother and sister in development.  He was so exhausted he couldn't move.  The dad and kids headed down the shore but I was surprised when the mom stayed with him and kept him warm.  Eventually after sitting there all day she had to leave to take care of the others. Not knowing what to do I scooped him up and ran him down the shore so he could to join the rest of his family.  I felt so sorry for the little helpless guy.  I really hope he made it and with some good luck and next hard days he might have made it.  I will always remember that little guy.  That day I also learned a lot about seagulls as I assumed they were all the same.  The ones found in downtown are called grey seagull(Harma Lokki) but the ones at the summer cottage are called old fisher gulls (Vanha Kala Lokki).

Once all the bird drama was over we continued picking up the place and started heading home.  A very nice Midsummer and one that I will never forget as there are so many good memories.  Thanks for reading and stay tuned for more soon!