Whitewater Kayaking and a Dark Day of Climbing in Kotka 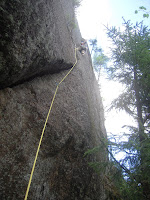 Last Thursday my friend Toby and I decided to head to some new crags that are being developed near Kotka and Hamina.  I was really excited as it is always fun to go to climb in new areas.  After a bit of a drive through the countryside we finally found the crags.  The first one was called Marjuvuori and presented some fine bushwhacking to get to it despite it only being about 500 meters from the road.  Once there we started climbing immediately.  Toby did a good ascent of this diagonal crack called Hirven Hönkä which looked reasonable.  While he was leading I was doing the mosquito dance as they were swarming me.


Once he was down it was my turn to lead.  The first 5 meters were very tricky.  I didn't even manage to barely get 2 or 3 meters above the ground and then fall on my first cam(a spring loaded device in a crack).  I was somehow so nervous that Toby noticed that I didn't even finish my double figure 8 knot to my harness.  What an idiot I was as it was a miracle that I didn't hit the ground!  Once I tied my knot properly, I fell three more times on the same cam.  I think the nerves got the best of me as I seemed to just try to reach and scramble instead of climb.  I decided to throw in the towel on that route.  We then went to look at this new unclimbed route.  It again had a very hard start with a hand jam crack.  It would be a first ascent if we could get up the thing.  I tried to get over my nervousness and tried first.  I managed to do a layback up the crack and place the first cam.  Then somehow I fell again as the rock was crumbling in my hand.  I tried again and managed to place a second cam a bit higher up the crux.  Then I fell again!  I tried to collect myself and tried one last time.  When I seemed to clear the second cam the top of the crux seemed in sight but my left foot slipped and had a good fall.  I threw in the towel again and Toby managed to lead it cleanly using my first two cam placements. 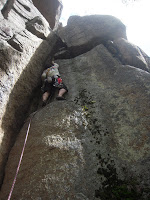 Then afterwards I was searching around and managed to climb a new route through this cave system sort of by accident.  I was just having a look and found it was easier to go up than down. Toby followed me up and we ended up on top of the crag.  Then we decided to bushwhack back to the car and head to the other crag.  Once there I tried to lead another route called Ähellys.  I managed the first section pretty easy but when I came to the crux I managed to get stuck with my chest between two walls!  I felt like a beached whale!  Pretty embarrassing but after a long while managed to place more protection and get out.  My nerves and confidence at this point were pretty low.  Even though the rest of the climb was easy I seemed to flop up the climb making the easy moves hard.

To add to the day I realized that somehow my GPS meter had gotten cracked.  The worst for me was still to come as on the way home I hit a bird while driving.  I felt sick and hope the poor guy died quickly as he was minding his own business before I came along.  What a dark and bad day of climbing for me.  Maybe one of the worst this spring with my bloody arms from falling so much and climbing like a whale... although the company of Toby was very nice as we had some interesting conversations and hope to go with him soon again. 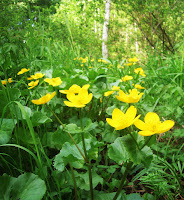 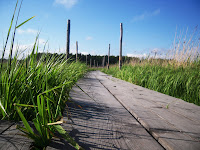 On Saturday morning I went on a quick mountain bike ride with Christian.  It was good fun as we cruised around all the trails in the city.  We also found some new trails.  Afterwards Annina and I went for a nice walk through the marshes near our house.  It was fantastic weather and really nice scenery as everything is so green now.  Was also nice to see some more flowers out and about.  Really lucky with the weather as it was on and off all day.  Managed to go exactly when it was sunny as it was cloudy and cold before and after. 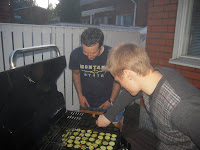 In the evening we went to Annina's brother's(Robert) new house and had a wonderful barbeque with his wife(Ellu) and daughter(Julia).  It was a fun evening as we first started with sushi and then barbequed!  The meat turned out fantastic and with a nice sauna completed the really relaxed evening.  It was unplanned but a really nice way to spend the saturday evening and hope to do it again soon.

Yesterday we decided to go whitewater kayaking near Kotka.  It was a really nice trip as when we arrived there, we were using another clubs summer house next to the river as base.  I have never been whitewater kayaking before so I was really nervous.  Once we started we paddled upstream through the rapids.  It felt as if I was just going to tip over all the time even from the smallest waves.  Once we got pretty far upstream near these large rapids the other guys started to play in the large standing waves that were1-2meters high formed from the rapids.  I finally got the guts and just plowed in and it was no problem.  After a few tries trying to surf on them all of a sudden I was upside down!  I tried to eskimo but didn't manage but managed on the second try!  =)  It wasn't so scary after all just kind of strange being upside down in big rapids!  So the rest of the day we just played in the rapids for many hours.  I flipped over maybe 7 times and the eskimo seemed to get easier and easier as time went.  By the end I was able to surf a bit and really enjoy myself until my arms could not paddle anymore.   Was pretty happy that I never had to swim from the kayak as two others did.  Seemed to go really well for my first time!  Once we went back to the cabin we had a nice sauna and made this huge dinner!  So fantastic.  Everyone was in a good spirits and we were laughing a lot and playing loud music.  Then we headed home in a sleepy relaxed mood.  A fantastic day and even though my ears were full of water it really made me smile. 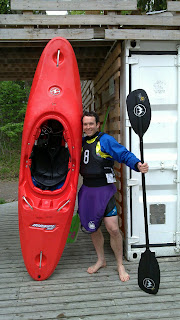 Thanks for reading!  Stay tuned for the next update! =)
Posted by Unknown at 11:43 AM