The week ended with the Royal wedding which I somehow ended up watching even though I said I wouldn't.  It was a bit funny as it seems like a whole different world that the royalty live in.  Would be nice in some ways but then again you could never do what you wanted and how you wanted.

So later on Friday afternoon Annina and I went to this little cliff that I found the other day and cleaned some new routes.  They are small highball bouldering problems that have some nice white granite with some funny features.  Anyways after I did a first ascent Annina climbed the same route after me.  Then since it was a first ascent(never climbed before) I decided to name it Kate and William as they were married that day.  Was somehow a good name.  Then I managed a more difficult route which I named 'Bumpy Road' due to the huge lump in the middle of the climb.  It felt pretty nice to do some new routes.  Also managed a third very easy route which we named 'Big Steps'.  It was a overall a pretty exciting day with the wedding and doing my first official climb.

The next morning I woke bright and early to meet my friend from Sweden Johannes(Juppe) to go for a quick climb at Rollarit.  It was pretty nice weather as I managed to lead the route Rullaportat in which I got stuck 2 weeks ago.  It was nice to get that out of the way.  Then I managed one new lead called Kaatunut Koivu in which wasn't very hard but there was a awkward hanging position in which I was way above the last protection.  There was a good ledge to mantle to so instead of fiddling with somewhere to put a cam I just decided to mantle the ledge.  It wasn't maybe the best idea as the last protection was halfway down the wall but I trusted my hands and legs and then all of a sudden was at the top.  Really weird climb but okay.  Then I was about to attempt another climb when all of a sudden the sky opened up with a lot of hail.  We quickly went under a rock packed up and called it a day. 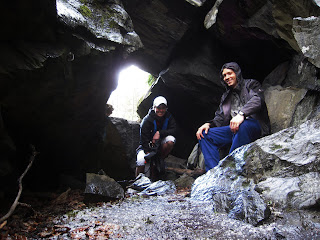 Since Saturday was Vappu eve as soon as I got home I opened my first beer of the day of many to come.  The weather was quite crap as it seemed to change every five minutes.  Annina and I eventually crawled out of our house and headed downtown to meet Swiss friend Rafi and his mate that were visiting for the weekend.  We waded though thousands of people to try and get a better view of the Havis Amanda hat giving ceremony. 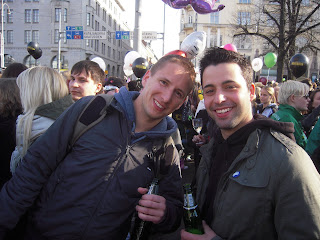 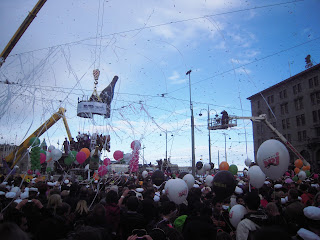 The air was filled with a party atmosphere as I had my backpack full of beer.  There were funny costumes and even though there were thousands of people I kept bumping into people I knew.  Such a small world after all.  It was a bit of nostalgia as we walked around Helsinki Annina, Rafi and his friend.  We continued talking and drinking the night away.  We eventually went to visit their hotel they were staying at.  Then at some point after a beer to many it was time to go home.

The next morning I woke with a terrible headache and felt awful.  I think it was one of the worst hangovers I have ever had.  Maybe i am just getting old... hehe.  Anyways we were supposed to go downtown and have a picnic with the other thousands of people but at least I couldn't manage to do much.  We then tried to go to the store to buy some food but realized it was closed.  Then we decided to really stay home and just relax.  Our little picnic was a quite short one but we ventured out onto the porch and ate some strawberries from Spain. 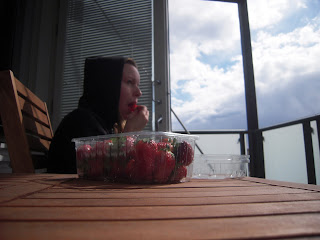 The weather was still very cold and sometimes raining, snowing, and just sunny.  Really weird weather.  Then we decide to go go for a nice stroll down our local sea shoreline.  It was really pretty at least and I saw the first 'King Fishers' this spring which is my favorite sea bird. 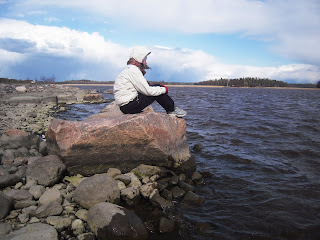 They are incredible at catching fish and are really fun to watch.  Would be nice to have their exceptional vision.  I didn't manage to get a picture of them since they are so quick but maybe sometime.  Then I had a nice Skype conversation with my parents.  Oh do I ever miss home even more.  All in all the weekend was a funny and strange one.  Definitely one to remember.  Will be waiting for the next Vappu as each one seems to bring some great memories.  Thanks for reading and until next time!
Posted by Unknown at 9:11 AM