The weekend began by picking up Robert and heading west under the looming clouds to Kasnäs.  The drive was a short 2.5hour journey which took us across one fairy to another large island.  We finally arrived in Kasnäs after a quick stop for food in a nearby town.  The weather was pretty atrocious and really windy so we met Hefe and went for a quick beer and watched a small section of the Finland-Russia hockey game.  Hefe is the one we were helping on his island and a professor at our school.

After feeling a bit goofy after one beer we loaded the boat full of supplies and took off.  It was a short 4km ride but it was so windy we had to sit on one side of the boat to balance it as the waves crashed into the side. 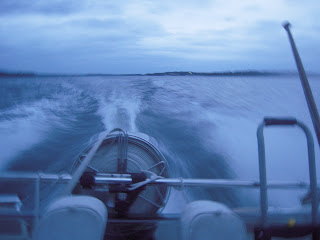 We continued crashing through the waves and darkness until we reached his island in the sea.  It was a welcome respite to see very nice prominent buildings standing on the island.  Both Robert and I had packed our camping gear but lately even though the main house is not ready they prepared the small shed for us to sleep in.  Even though the shed is quite new it already had a lot of character especially as it seemed like every corner was jammed with little wooden boats.  Really gave the feeling that we were out at sea.  After all we were so..  Then after a quick tour of his island I immediately was drawn to the next island where there stood some pretty high sea cliffs.  After the tour with the wind flapping madly at the island we decided to turn in and wake up early the next morning.  Was also nice to hear the new that we had won the game against Russia.

The next morning we woke quite early to a pretty frigged shed and hard rain outside.  We ate some breakfast quickly and Hefe headed to town to get some concrete.  Robert and I Dreaded going outside in the cold drizzle... After all in the middle of the night I saw it was snowing.  Once we got going though it didn't seem like such a problem as I even managed to enjoy a cold break in the rain and watch the sea. 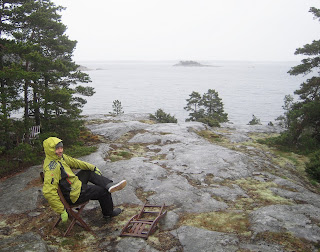 Once we finished up these doors we were supposed to fix we started drilling holes in this rock for the windmill we were helping to install.  The rain was relentless and we started to get colder and colder but we managed to make a cement form near the shed anyway. 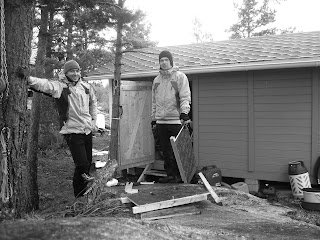 Once we finished up the forma we put it in place and awaited the concrete.  Once it arrived we started mixing the  stuff up.  When it was raining it seemed like the concrete just went everywhere including  all over us.  With Hefe being his usual self we managed to pour 6kilos of concrete and by the time we were all said and done the day seemed to have passed as we did lots of small chores between.  Robert and I managed to find this Kerosene heater and we passed the night away drinking a few beers and chatting.

The next morning Hefe was in a rush to get a trial run of the heavy pole up for the windmill so we decided to give it a go.  We ended up building this big A frame contraption and an elaborate pulley system.

At some point we had the pole quite high but with the concrete still wet the enormous weight shifted the block.   So we quickly lowered the pole and took the boards off to find that Hefe had placed stones in the bottom.  This made it so that the concrete didn't bond to the rock.  So the rest of the day we dedicated to fixing the block.  By the time we were done it was time to call it a day.  With a less eventful journey back to shore and a quick look at the climbing cliffs we headed back to Helsinki.  Once home it was a short break before the Finland-Sweden Final hockey game for the World Championship started.  It was fantastic as they really played their hearts out and won 6-1.  Really fantastic to see!  Congrats to them as they really deserved it!! 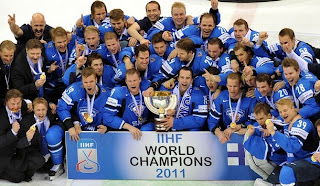 http://www.sportsencounter.com/wp-content/uploads/2011/05/Finland-03.jpg
With such a happy mood filling Monday it was time for me to start my kayak season as we have a few training sessions in the next days.  Overall it was another fantastic weekend and quite an interesting one at that!  Thanks for reading and look for my next update!
Posted by Unknown at 4:20 PM