The week began with quite a celebration as the Finnish hockey team came home.  100,000 people flocked to the streets to great the team.  We decided to stay at home to avoid the chaos and to actually see something.  It was quite impressive. 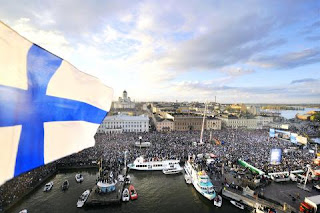 They seemed to really enjoy themselves as they paraded around town.  With hockey meaning so much to Finnish people it was quite a sight!  The president also came over and congratulated them and presented them with a card from some children.  Really nice! =)  They sure played their hearts out this year as every game they came from behind to win!  They never gave up and kept the fighting spirit!  Anyways congrats to them again! =)
http://www.taipeitimes.com/News/sport/photo


The next day after work I headed straight to Meilahti to do some bouldering.  It was pretty fantastic place as I have never been there before.  The wall is pretty high at nearly 8 meters so I had to take my time and be careful as I was alone.  I managed three routes, one which was quite interesting with a small roof to climb over. 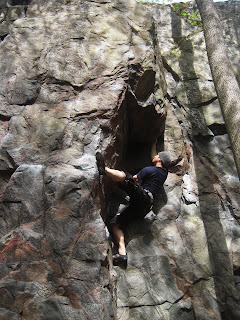 They were all pretty difficult but managed to work out the moves and got to the top.  The climbs were rated 5c, 5c, and 5a.  Had a pretty good time and then immediately after went to help teach a kayak class at our club Merimelojat.
I felt a bit funny as all the instruction was in Finnish, so I was just kind of checking all the time that people didn't tip over and help keep together.  We went for a small tour around the local island.  We went ashore and had a talk about gear and safety things. 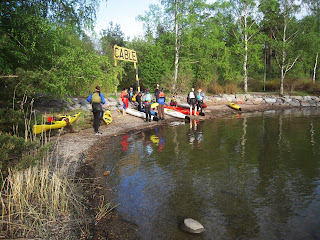 Afterwards we practiced the sea rescue techniques.  Since I have never done them, they also said I have to participate.  At first they said I wouldn't have to go swimming if I could do the eskimo.  I did the eskimo(flipping back over without getting out of the kayak) no problem but then a few minutes later they made me go swimming anyways.  I felt a bit funny tipping over on purpose and getting out, so instead I just jumped out.  The water was freezing!  It went well though and with a little help managed to get back in okay.  Everyone else also managed.
The next day we focused on kayak polo(similar to regular water polo but with kayaks) techniques.  After we got started I was just going around again making sure noone tipped over and if they did help them.  I wasn't really paying attention then somehow I managed to flip over myself!  hehe.  It took me a second as I had the paddle in one hand but managed the eskimo again no problem.  Glad that Juha has taught me so well!  Then afterwards we had a mock polo game which was pretty fun.  Three new people tipped over but they just swam ashore no problem as we wer quite close.  In the end it was really nice to get back in the kayak and can't wait for next week when we start to play again!
In the evening at home we noticed a pretty funny things happening.   A plant was growing from our drain!  hahahaha!  =)  Really funny.  Maybe we should keep watering it! 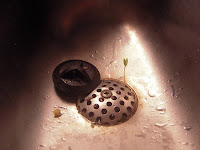 Well in any case it has been an interesting week so far with water and rock.  This weekend there is no plans yet but I am sure there will be some adventure!  Thanks for reading and stayed tuned!  Take care!
Posted by Unknown at 10:23 AM