My weekend started off a bit rocky as there was some problems at my work but then I went for a nice short ride with Annina.  We went down the Vaanta river a little bit and found this nice rock to enjoy  a cider.

It was a welcome and nice relaxing break from the strange week at work.

The next morning on Saturday I woke pretty early and headed towards Mullunmäki to do some bouldering.  It was funny as I have never been there so I just punched in the coordinates in the GPS and just decided to see what happens.  I have never used it that way before but wanted to see how it worked.  I ended up on some pretty tiny roads and then when I looked around I was riding by some huge mansions!  Really strange as I had no idea that those neighborhoods existed over there.  Anyways by 'following' instructions from the device I ended up at the bouldering place.  Funny feeling about following the GPS as I felt out of control.  I decided from then on I will only use that function as a need to basis.  I guess I like the feeling of a traditional map and choosing my own way.

Once I arrived the place was filled with huge literal boulders in which the climbing problems existed.  I climbed 13 routes pretty quick and failed on two of them.  Most of the routes were graded 5 but I also managed two 6a's and twp 6b's to my suprise.  I was a bit nervous all the time because I was alone again without a crash-pad and there was some strange guy walking around the forest.  I wasn't really concerned about my safety but more about my belongings.  I think this was another reason I climbed so fast... also the 6b routes I didn't really mean to climb.  It sounds funny but I tried the opening moves then I realized I was pretty high up already and just decided to finish them off.  One interesting problem was called Reebus. 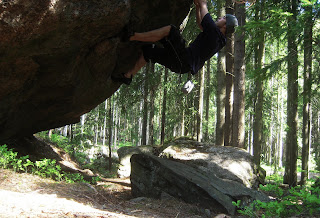 It was under a huge roof that was pretty easy but to get over the roof was very committing.  I decided that without a crash pad i just couldn't do it as there was a sharp rock below.  After about 15 tries I gave up on it and decided to head home and felt relaxed as soon as I left the area.


Later on in the day with a little bit of a rush I picked up Annina and we headed to the Merimelojat clubhouse for the 80th year birthday party of the club.  It was a bit funny as we arrived 1 hour late but luckily my friend Juha saved us seats.  We spent the night chatting away with Juha's little sister and girlfriend.  After some dancing the fire alarm went off.  When the firemen came apparently they were trying to film some reality tv show.  It was a bit funny somehow.  Anyways after some more drinks and a nice evening we headed home on the bikes. 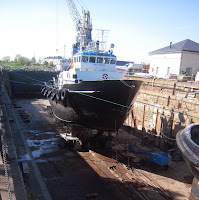 The next day we decided to head to Suomenliina.  It was really nice once we got there.  For some reason the Seagulls were incredibly aggressive.  It took us nearly 1 hour to find a place from the seagulls and wind.  We finally found a place that was somehow a dip in the land where there was no wind.   It was so warm as we baked in the sun for the next hours.   It was a pretty fantastic day as we just relaxed and watched the Kingfishers fish all day.  Then when it was time to go I accidentally found a whole new part of the island!  It is crazy as I have been there countless times but never had been to that part.  We walked around a bit there and it felt kind of strange because there was almost no people there.  Really crazy but really nice!  Then we sort of ended up by accident in the dry docks.  Pretty cool but I don't think we were supposed to really be there.  What a nice day! 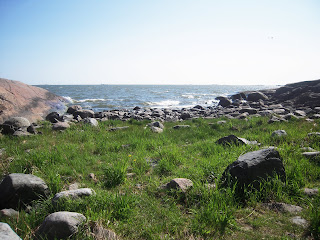 Yesterday was kind of boring, but cool at the same time because of a botched boat building project was given to me.  I cut it down yesterday to make a small usable motorboat.  Then next step will be to get it to the summer cottage...Fun fun!  My hamstrings were crazy sore as well... I guess I ended up riding about 100km on my mountain bike this last week only just riding around.  Not very far but since I have been off the bike for a long time it is okay.  Now I just need to ride more!  Overall the weekend was a funny one but really nice!  This week will be more kayaking and climbing!  Thanks for reading and stay tuned!
Posted by Unknown at 10:10 AM