I was supposed to go to the island I was talking about in the last post it was postponed until this coming weekend.  So instead my weekend was filled with lots of social activities.  First was Annina's niece's 2nd birthday.  It was fun as we had fantastic food and was nice to visit with her family.  Then immediately after the party we went to Annina's half sister Heli's 30th birthday party.  We didn't know many people there but it turned out to be a fantastic evening.  I guess this is in part due to the 30 bottles of champagne they had there.  =)  So it ended up being a pretty long but nice evening.  The next day Annina's mom and Pekka came over for dinner.  We made them some twice baked potatoes which they seemed to enjoy.  Overall it was a really nice weekend. 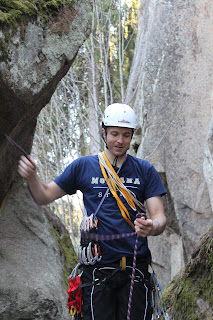 On Tuesday I woke up early and started driving north with Christian to Annina's family summer cottage.  We first took a detour and went for a nice climb at this 25m (82ft) wall near Lahti.  It was an interesting place as the routes looked really impressive.  The first route was a nice slabby route that looked really easy.  Somehow I managed and ended up at the top and almost getting a cam stuck in a crack.  The next route called Taisteluplaneetta Galactica (VS) was really strange and interesting looking.  The route started with a big overhang and a large crack.  At first it looked really hard.  It was a bit scary to make the moves underneath the roof but managed to somehow get through them after doing the splits.  once over the roof it was fairly clear sailing to the top. 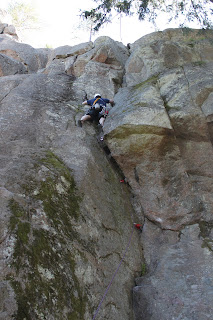 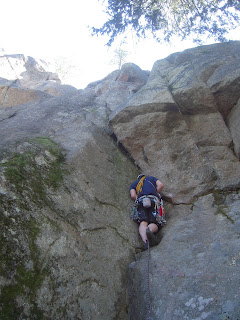 With the time going quite fast we did two other fairly easy routes with Christian seconding all of them quite okay.  We then decided to head to the cottage as it was still a small drive away.  As soon as we arrived it was really nice to see the open water.  Last time we were there it was still iced over and it definitely looked different.  We were starving since we hadn't really eaten anything yet in the day so we grilled courtesy of Christian some corn, potatoes, and a nice slab of meat.

It was a fantastic lunch.  Then afterwards we did a few chores around the cottage and christian attempted to go fishing.  He found some worms and tried with no luck.  I had a different strategy and just threw a fish trap from shore.  I am a horrible fisherman so this was the best strategy for me.

After placing the trap we decided to start up the sauna and put the dock in place.  It was a bit funny putting the dock in until Christian's camera fell over and the lens broke.  It was very unfortunate as his camera is pretty expensive.  Luckily it was only the lens that broke and not the whole camera.  With a sullen mood we went for a quick row in the boat and then we headed for the sauna.  It was really fantastic as we were able to jump from the dock and start enjoying summer! 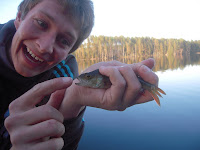 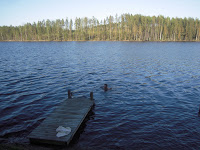 With the day winding down it was time to head home.  It was funny as I had forgotten that I had thrown in the fish trap.  When I pulled it out we found two small fish there.  They were so small we just let them go.  I haven't used the trap very much but I guess it works pretty good! =)As soon as we left the cottage we saw a moose in the trees.  =)  Was funny as it's been awhile since I have seen a moose.  Christian was exhilarated as it was the first moose he had seen in the wild.  Was quite funny but really nice.
The day was really nice and we were pretty tired at that point.  On the way home we stopped at Tähtihovi to have a look at the last sun of the day.  We finally arrived home after a pretty full day of excitement.  This next weekend will be interesting as I will really go to the island and do some work.  Should be interesting camping on the sea island!  Thanks for reading and stay tuned for the weekend report! =) 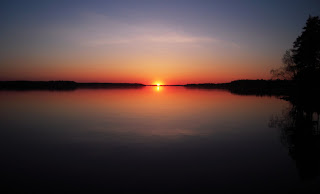 Anyone interesting in this blog in German please go to Christian's blog here.
http://christianproehl.wordpress.com/2011/05/10/1-urlaubstag/
Posted by Unknown at 8:36 AM