Yesterday Johan and I visited Jaanankallio. We both decided to take a day away from work and school. Escpecially since I worked double time on tuesday. Johan came and picked me up and we headed to Hyvinkää (50km N from Helsinki) where the crag is located. I wasn't so sure we would find it but I had the GPS coordinates but the batteries were dead in my Garmin device. So we stopped for a quick breakfast and I tried to buy batteries. I can't believe that the gas station didn't sell AA batteries and then when I went to the store next door they said I couldn't buy them because I didn't have a company. Craziness. Well we had the directions so we just had to hope we could find the place. Luckily we could easily see the crag from the road and there finally was no need for the GPS device anyways. The walk in was rather short and a bit funny as we skirted around the edge of this farm field. It was somehow really beautiful with it's bright green colors. 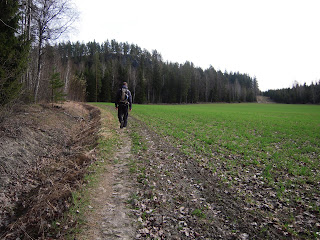 The weather was fantastic as we started to head up some routes that we have never seen before.  The crag is about 18m or 59feet high.  The first climb (Supernova S 4a) was a bit awkward but really nice Trad climb.  Trad climbing is where you place your own gear into the rock as you go up the face in order to stop a fall for those who are unfamiliar with this term. The weather couldn't have been more perfect.  The next climb (Rev it Up VS 4c) was a bit strange but really nice.  The first part of the climb I free climbed due to not many places to put gear and the first bit of gear I put was about half way up. 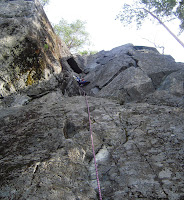 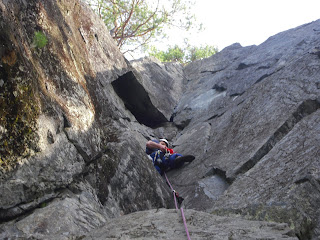 Then a bit higher in the climb I found a bunch of strange stuff...first I found a cam that someone else had got stuck in the crack.  Then I found a place where someone had put a sling around a rock and it looked like it ripped!  Hopefully noone actually fell from there.  Once through a few hard moves to the top it was fantastic sunny view and could see the field below full of swans.  Pretty peacfull place.  Then Johan succesfully came up after me with no problems as I soaked in the sun. 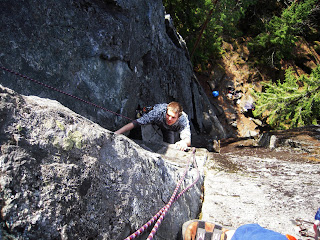 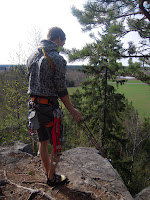 We continued on climbing the next route Zombbari HVS 5a which was another fantastic climb.  Then afterward we attempted what we first thought was a route called Paskaräni HS but we had no idea how the route went I came to what we thought was the crux and I fell 3 times on a small wired nut(metal wedge jammed in a crack) before I bailed.  We realized that we were on a different route called Woodpecker F6c which was much harder and were supposed to go more right and use the fixed bolts.  Well we successfully climbed the easier route afterwards.  It was my first real fall in trad climbing but in some ways pretty good as now I know the equipment works.  We then did one more easy route called Paskat Marjan Varation VS 4c before heading home.

The walk out was again pleasant as we walked over little streams and these little yellow flowers were starting to bloom.  The birds were chirping again and I tried to take some more pictures but the camera didn't seem to want to work.  The day was successful as we managed to get some climbs in and was nice to get my confidence back after some scary moments a few weeks ago.  Such a beautiful day as we were climbing in our t-shirts and hope this weather continues for Vappu (big party day in Finland) this weekend!  Thanks for reading and stay tuned! =)
Posted by Unknown at 10:36 AM